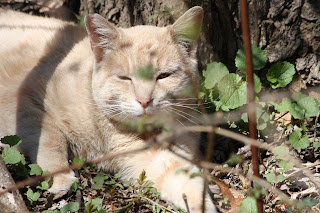 Cry Baby, named for the fact that he cries non-stop for food, used to be part of Donna's colony. Donna cares for a dozen cats a half-mile away from Stone Ledge. Her colony used to be comprised of sixteen cats but several have gone missing. 'Cry Baby' was one such MIA. He disappeared sometime in June of 2008. As the days turned into weeks, and the weeks into months, and he did not return, Donna assumed the worst. Then, one morning in December of 2008, a lovely, wheat colored tabby approached me at Stone Ledge. I heard his cries before I saw him. In fact, since the other ferals rarely meowed, I was pretty startled.  When I called Donna from my cell phone and described the very vocal cat that was eating at my feeding station, she immediately high-tailed over to confirm her hopes.

The moment Cry Baby saw Donna and heard her voice, he began a high-ptiched meowing and circled her with his tail held high. They were both thrilled to be reunited ! So where had Cry Baby been for six months? Having heard, and even witnessed, first hand, many tales of disappearing and reappearing ferals, it is my opinion that this can simply be chalked up to

'the lives of cats.'

As for Cry Baby, he has chosen to stay close to Stone Ledge in a feral house we provided for him. Although, every now and then, he disappears.