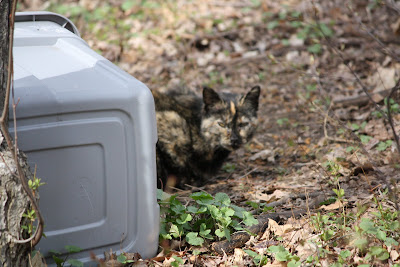 Prudence is an uber-feral. I rarely have the opportunity to get close to her. In fact, I usually catch her out of the corner of my eye and then--she's gone! It also does not help that her tortie mane is great camouflage amid the leaves and rocks. She does not scamper and dart between trees like Midnight and Delilah; rather, she stealthily skulks across the the forest floor. Prudence is a hunter, I have no doubt. She often disappears for months at a time. This photo was taken in April of 2009. I thought it was my last glimpse of her. For months, Prudence was MIA. On this last sighting I noticed that her eyes were tearing and she did not look well. When she did not appear at the colony for weeks and then months, I assumed the worst and assumed she was dead. Then, more than eight months later, on New Year's day, while feeding the other cats, I had the eeriest feeling that someone or something was watching me. Delilah must have felt it too because we both turned at almost the same instant to look towards the eastern hill that overlooks the feeding station. There, perched on a pile of logs, her tortie fur glistening red in the sunshine was Prudence. She looked clear-eyed and alert. Prudence quietly makes it known that she is the grand dame of Stone Ledge. As soon as they saw her, Samson and Dlilah quietly moved away from the food dish and waited for the queen to dine first.

Prudence does not live in the feral houses I have provided. Instead, she prefers to live under an old shed near the colony. Unfortunately, because she is so erratic and clandestine about her comings and goings, I have not been able to trap her. This has become one of my greatest frustrations. A few weeks before Prudence disappeared last spring, I saw the other girls--Delilah and Midnight--creeping off to the shed on several occassions to visit Prudence. (The other cats rarely show any interest in the shed.) Although no kittens appeared, I believe that Prudence may have had a prematurely born litter that did not survive. (I also thought her belly was suspiciously big.) I have read that queens often have designated babysitters for their litters. (This is something I saw play out in another colony and will talk about later.) I believe this pregnancy and ill-fated litter may explain Delilah and Midnight behavior. Curiously, Samson and the other males was stayed far from the shed area during this time period.