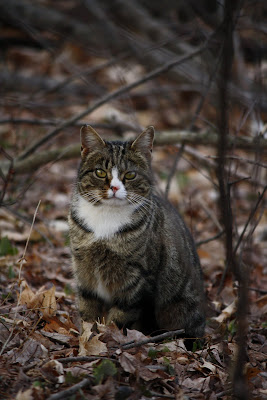 Although Delilah is a tabby with lovely swirls of of black and gray fur, she has Snow's same rounded, Persian looking nose. I also suspect her mom is 'Dear Prudence,' and that she, Samson, and Max are litter mates. Donna gave Samson and Delilah their names. Like most jellicles, however, they have multiple names:  'Red' and 'Baby' being their other most common ones. When I first met Samson and Delilah they alternated  between sleeping in a garbage dump and in a hollow stump. They have now adjusted to sleeping in one of the feral houses I provided. Delilah is physically lithe, but seems mentally ditsie. In fact, if it were not for the fact that she is almost always in the company of Samson, I suspect she would not survive. When you see Samson, Delilah is usually a few feet behind. It's obvious that she worships him. She constantly head butts and rubs against him. Some days, when he's not in the mood for her attention, he halls off and whacks her on the head with his paw. She just shakes herself off and continues along behind him, adoringly.