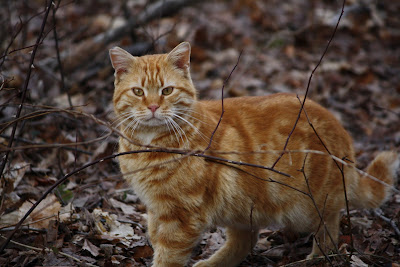 Samson, with his softly rounded nose and thick head is surely one of Snow's progeny. He and Delilah have the same whorls of color through their coats, as well as Dear Prudence's eyes, so I am fairly certain they are siblings and Prudence is their mother. I have met trail walkers who recall having seen Samson and Delilah playing near the trail when they were just small kittens. (Why did no one rescue them?) I even met a woman who says she has fed them since they were young and is now able to pet them. I believe this is true, as I am able to stroke Samson and scratch him behind his ears.

At the time of Samson and Delilah's spay/neutering, a veterinary team assesed their sociability. While Samson might successfully adjust to a home environment, it was not indicated for Delilah. I could never purposefully take beloved Samson away from Delilah, so I have accepted that Stone Ledge, at least for the time being, is their home.