If you do cat rescue, you have probably heard this question more than once: in fact, you have probably heard it many more times than you would like.  As feral and homeless cats increase in number, more and more are finding their way into backyards and onto decks. Friends, family members, and even chance conversations with complete strangers can find a rescuer explaining how to look for a lost cat's owner, or how to feed, house, and TNR a roaming feral.

A close friend of mine, who knows I work with feral cats, casually mentioned that her chidren had seen 'a very hungry and dirty looking black cat' in their yard, and that her son had given the cat a carrot--which the cat ate (!!) When I explained to my friend, who does not particularly like cats, that the unkempt cat is probably either a lost pet or a sick and underwieght feral, and that a little protein might be a better choice of food, her reaction was that she did not want to encourage the cat to frequent her yard. I immediately told my friend that finding a cat in her yard is good luck! I then offered to feed and trap it.  My reasoning is that if it is lost, I may be able to find the owners while it boards at a local sancuary, and, should it turn out to be a feral that needs medical attention--including spay/neutering and a few good meals--that can be worked out too. Of course, if it's homeless, I am secretly hoping that I can show my friend and her children just how easy it is to put up a feral shelter and leave a little food and water outside each morning for their new tenant: a small price to pay for keeping their property rodent free!

"THE VAGABOND CAT THAT CAME TO STAY"

A beautifully written essay by well-known journalist John F. Burns, "The Vagabond Cat That Came to Stay" appeared on the front page of last Sunday's New York Times "Week in Review" section. Mr. Burns, a foreign/war correspondent with the Times, has lived all over the world and collected many cats on his travels. "Scuzzi," the topic of this piece, was barely alive when the Burn's family discovered him washed-up on their Delhi verandah. For a treat read:

In my opinion, one of the best all-purpose websites for information on anything cat--including both pets and ferals--is About.com: http://www.cats.about.com/ Franny Syufy blogs on a wide variety of issues, and her column is packed with practical information: everything from health care and behavioral issues to posting the most adorable cat and kitten photos submitted by readers. I always find helpful hints and ideas in her articles.
Posted by Nancy at 6:01 PM No comments:

If you are wondering what the deal is with feral cats, but only have fifteen minutes to get the scoop, check-out this video by the Humane Society of the United States (HSUS) for an overview of feral cats:
http://www.hsus.org/pets/issues_affecting_our_pets/feral_cats/

If you have a bit more time to read up on feral cats go to:
http://www.feralcat.com/
Posted by Nancy at 5:54 PM No comments: 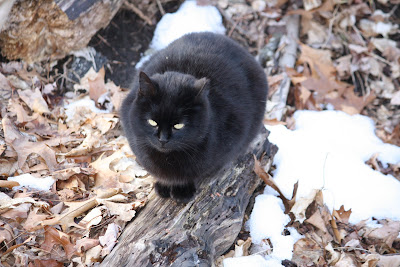 Each and every morning when I arrive at Stone Ledge, Samson, Delilah, Max, Cry Baby, Prudence, and Phantom greet me with meows, head butting and tails held high like little flags as they announce themselves with all the pride and confidence of olympic athletes at the opening ceremonies. It is only Midnight who comes alone, slipping unnoticed through the underbrush. I usually hear her softly call to me before she steps into view. Midnight does not live with the other cats, but chooses to stay in unknown quarters in the hills beyond Stone Ledge. She does not eat with the colony either. Her bowl is under a forsythia bush at the far side of the woods. There is a large rock next to the bush that she sits on while she waits for me to feed the other cats. She does not, however, let me forget that she is patiently waiting, as she talks to me in a sweet yet persistant series of meows while I pour water and pop cans for the larger brood.

Midnight is petite with small, delicate paws and an angular face. She is black with green eyes, but in the sunlight streaks of dark mahogany are visible in her fur. Midnight is not much larger than a six month old kitten, yet she has birthed at least one litter--if not more. Jo trapped Midnight with two of her kittens (the only two we were ever aware of) at Stone Ledge.* Then while trying to move Midnight into a separate cage prior to having her spayed, Jo was badly bitten, and Midnight, who had not yet had a rabies vaccine, had to remain in quarantine for over two weeks before the vet felt comfortable in saying that Jo was out-of-the-woods and could release her. During this time, Midnight was miserable and it was obvious that, while her kittens could be socialized, she was a dyed-in-the-fur feral. Jo released Midnight at Stone Ledge where she has maintained her solitary life-style (if a cat can be said to have a "life-style") ever since. I often wonder if she has somehow been hard-wired to remain in the place where she last saw her kittens....I doubt that I will ever know the answer.

*Jo kept Midnight's kittens who are doing splendidly.
Posted by Nancy at 8:03 PM No comments:

We have not had a rainy day here in Westchester County for weeks--or so it seems, and I am feeling nostalgic for a stormy afternoon to curl up with my four-legged friends and watch an oldie from my cat film archives. One of my all-time childhood favorites was That Darn Cat. I was twelve years old when the original, staring Haley Mills and Roddy McDowell, was released in 1965. My family was spending the summer in Chatham, MA, and the local theater ran matinees for kids on rainy days only. What a treat: I did not miss the beach one bit!

Here's what Amazon has to say about the original, 1965 classic:

"When a slightly cross-eyed Siamese cat named D.C. (Darn Cat) turns up with a wristwatch around his neck instead of a collar, it could be just the clue the FBI needs to crack a series of bank robberies in this lightweight comedy from Disney. The watch belongs to a bank teller who has been taken hostage. Dean Jones stars as the good-hearted FBI agent assigned to the case. Unfortunately, he is highly allergic to, you guessed it, cats. Hayley Mills is D.C.'s doting owner who hatches a hair-brained scheme to follow D.C.'s every move until he returns to the crooks' hideout where he got the wristwatch. After a lot of sneezing, slapstick, and comedic intrigue, the bank robbers are foiled, the hostage is safe, and everyone is happy. An impressive supporting cast of Frank Gorshin, Elsa Lanchester, Roddy McDowall, and Ed Wynn add to the zaniness. Released in 1965 (and remade in 1997), it is understandably dated, but the performances are fun nonetheless. Hayley Mills is delightful as the determined and unflappable wannabe sleuth, and Dean Jones proves he is adept at physical comedy. This is a movie of little consequence, just a clean, fun diversion that the whole family can watch. The theme song is sung by Bobby Darin." --Peggy Maltby-Etra
Posted by Nancy at 7:22 PM No comments: