LIONS AND TIGERS AND BEARS: OH MY!

Well, maybe not lions or tigers in Westchester County, but coyotes, fox, deer, wild turkey, skunk, raccoon, woodchucks, and, now, black bears. This week, a black bear was sighted a mere quarter mile from Stone Ledge. Although the thought of a bear cruising the colony does not frighten me in the way a visitation from a coyote or a Great Horned Owl produces shivers down my spine, it concerns me to know that bears, desperate for territory, are venturing into high density population areas. Moreover, if there are bear close by, it is only a matter of time before coyotes happen upon the cats. As a colony manager, I must constantly remind myself that while I can feed, shelter, and provide a modicum of medical assistance to the cats, I can not keep them safe. For me, this is the most difficult part of caring for ferals.

To add to this sobering thought, Samson turned up injured today, and Max is missing. Although Samson was too unnerved by whatever happened to him to venture close to me, I was able to see a bloody puncture wound on the back of his left front leg. Swelling--probably a developing abscess--had already set in. Max, who has not missed a morning feeding for at least four months, was no where to be found. I can only pray that he stayed away because of early morning, heavy rains, and not because of any severe injuries.

Recently, several cases of rabies have been identified in the neighborhood of Stone Ledge. Samson was vaccinated for rabies in October of 2008. According to the vet who neutered him, his rabies shot should protect him for up to three years; however, just to be safe, I hope to get him back to the vet for a booster and an anti-biotic. Wish me luck!

I consider myself a total novice when it comes to understanding cat behavior. Yet I am slowly discovering that when I take the time and open my senses and awareness to them, the cats tell me a great deal. For example, I have known for nearly a week that something unpleasant was afoot. Delilah, a seven pound barometer for trouble, has been acting skittish. Instead of purring and head butting with the boys at the feeding station, she has been holding back, nervously advancing to eat a few bites before leaving to scan the marsh area or dashing ten feet up a tree, as if doing an emergency run through---just in case. Then, last Sunday, while I was a few yards away feeding Midnight, Delilah walked down into the marsh. Suddenly I heard her distinctive high-pitched screeching and screaming. I dropped everything and went running towards the swampy nether land. I did not see her, but what I believe to be two gray coated cats, were moving swiftly through the reeds. Delilah did not return to eat for two days. I now suspect that these "roaming ferals" may be responsible for Samson's latest injury; and may be the reason that dear, punctual Max has disappeared. Again, like a mantra, I repeat to myself: I can fix, feed, and shelter, but I can not keep them safe. 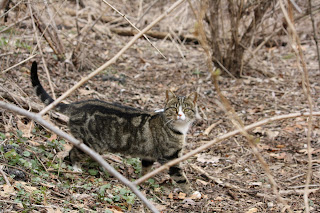