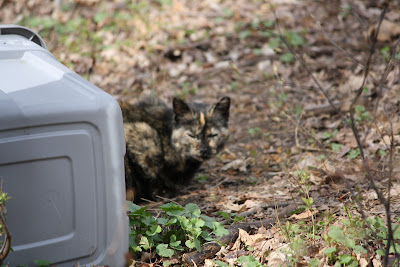 Dear Prudence (tortie)
So much has happened at Stone Ledge since my last post. To begin, Dear Prudence has once again returned! After a ten month hiatus she appeared one morning with a large, long-haired male that I have dubbed Pumpkin. As far as I have been able to discern, Prudence and Pumpkin reside together under her favorite shed. They eat out of the same bowl, or take turns standing watch while the other one eats. (Pumpkin likes canned and Prudence prefers kibble so I guess it's a match made in kittie heaven) Prudence looks strong and healthy, and I feel relieved to know that she has not had to worry about providing for kittens for the past year.

Speaking of kittens, a new litter of kittens appeared in September. After socializing them in my office for a month, I am happy to report they have all been adopted through a local SPCA.

Unfortunately, Samson received yet another bite wound at the beginning of November. I am now willing to admit that this sweet, mellow boy is the alpha in the colony, and that he stands his ground when interlopers pass through his territory. A goal for 2011 is to retrap Samson for re-vaccination.

Most recently, two snowstorms here in the northeast have hit Stone Ledge hard. To make my life easier, and the cat's lives a bit more enjoyable, I have been adding a small amount of sugar (one to two teaspoons of sugar per half gallon of warm water) to the water bowls each morning. I prepare this at home using gallon containers. This process makes the ice that forms in the water bowls overnight easier to empty, and the cats lap up the warm water as if they were enjoying a cup of hot tea!
Posted by Nancy at 6:06 PM No comments: