When I first saw Pumpkin sitting under the shed at Stoneledge I gasped in astonishment. He was a gorgeous, long-haired, blue-eyed orange tabby. In fact, he looked like a lion! He was also talkative and very hungry. In fact, he was so talkative I thought he might be a stray. However, as soon as he ate he took off. After this initial showing, Pumpkin appeared at random intervals often several months apart. It was always the same scenario: eat two, five ounce cans of food then high-tail it back into the woods. Then, this past winter he began showing up a bit more regularly and staying with Prudence under the shed. They seemed to be feline soul-mates. Yet as soon as mating season began in mid-February, Pumpkin appeared less frequently, and when he did come to eat he looked worn out with matted fur and a possible URI. Jo and I decided it was time to trap and neuter him.

Pumpkin was trapped last Thursday, March 17th. The day started out as the first truly magnificent spring day this year: temperatures in the high 60’s—perfect for our local 250th St. Patrick’s Day in NYC.
Pumpkin was waiting patiently with Prudence when I drove into Stoneledge. Sadly, he looked terrible. His long, matted fur had been falling out in large clumps, exposing sensitive skin. Recently, he had also seemed very stressed—possibly the result of mating season or not feeling well. In any case, he hissed and growled at me as I approached with the trap. He then turned and snapped at Prudence, narrowly missing her.

The vet diagnosed Pumpkin with FIV and recommended euthanizing him if he could not be placed in a home with other FIV’s or as an only cat. She would not release him to be returned to the colony. Given the fact that Pumpkin was too wild to go to a home, coupled with the fact that he was a roaming feral, and, therefore, might not be treatable if he required future medical intervention, we decided to say good-bye to Pumpkin. It was very painful but Jo and I decided that we did not want to risk the chance that he would suffer with an untreatable condition in the wild. It was, and still is, heart-breaking to think that, after surviving such a long and terrible winter, Pumpkin would not be able to enjoy his spring and summer in the woods and fields that were his home. And, of course, saddest of all, Dear Prudence surely waits for her pal to return.

Pumpkin's story is bitter-sweet, however. In January, Donna, Jo, and I discovered Pumpkin’s offspring: five-month-old “Jem” and “Scout” were trapped, spay/neutered, and vaccinated in early March. Our only regret is that we did not know of their existence earlier so they could have been placed in forever homes. However, they now have shelter, daily food, and water. Both kittens have Pumpkin’s wonderful soulful expression, and Scout even has her dad’s sky blue eyes. (Jem’s are green!) Hopefully, we will be able to locate and trap mom soon!
Posted by Nancy at 6:22 PM No comments:

The human loss and suffering in Japan is heart-wrenching and tragic beyond words; however, since this blog is devoted to cats, and feral cats in particular, I want to say a brief word about Cat Island. 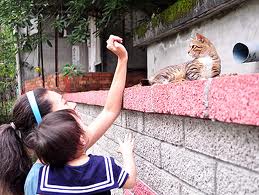 Tashirojima, or "Cat Island" is a small island off the coast of northeastern Japan. It was once a bustling fishing village, but has, over the years, become popular with tourists who want to see the 100 or more beautiful cats that freely roam the island. These cats are cared for by fewer than 100 residents, who are mostly elderly villagers. These cats are revered for the prosperity and the good fishing they are believed to bring to the community. Cat Island even has a“Cat Shrine” near the center of the island where locals and tourists can pay homage to these local felines.
Today, I am offering a prayer to the Goddess Bast that the cats of Tashirojima maintained their talisman power, and that the island and its residents have survived this horrific tragedy.
Posted by Nancy at 5:05 PM No comments:

Why do TNR (Trap/Neuter/Release)

"You become responsible, forever, for what you have tamed."  Antoine de Saint-Exupery

A friend asked me today why I spend so much of my time and resources caring for feral cats? It's a good question, and it certainly crosses my mind at least once a week! The best reply I can think of is the above quote, spoken by the fox to the Little Prince.

Cats were domesticated roughly six thousand years ago. Those that are uncared for are slowly slipping back to an "unsocialized" status. With this homelessness comes hunger, disease, and suffering for many adult cats and kittens. TNR (trap/neuter/release) is, in my opinion, the only solution to a collective responsibility that began those many centuries ago when the Human species welcomed Felis Catus into their dwellings. 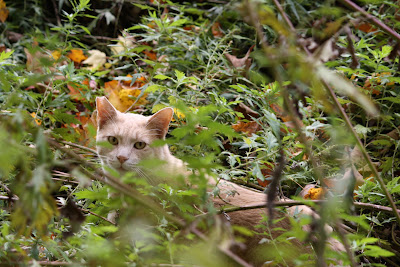 Millou's story is the tale of a very special little kitten that was rescued in Greece by a couple who happened to be vacationing there. It is one of the most beautiful and heartfelt stories I have ever read. I hope you will go to http://www.adriancowderoy.com/index.php/blogs/millou and read about an angel called Millou.