ATTICUS: The Cat the Shelter Turned Away 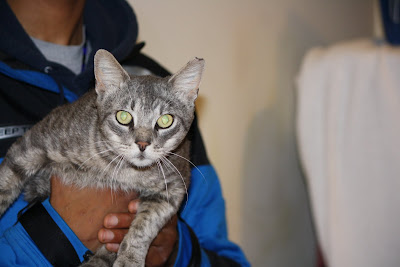 Five weeks ago, a boney, gray tabby appeared at Jem and Scout’s feeding station. He was standing near the empty food bowl wailing his head off. Clearly, he was starving. In fact, he nearly grabbed the dish out of my hand as I attempted to place it in front of him. Jem and Scout, who had, several months earlier, been scrawny and half-starved too, stood back to let this strange, skeleton of a cat eat first. They seemed to understand that food was critical—possibly even a life or death issue for this interloper. Truly, the little guy looked like he was a few days and a can of tuna away from death’s door. So, he ate and he ate some more, and he kept on eating until I was certain he would toss the entire meal back up, but he didn't. My friend Donna and I decided to call him “Atticus” to keep on theme with Jem and Scout a la To Kill a Mockingbird.

Atticus was possibly the ugliest cat I had ever seen. His fur was a dull, faded shade of gray, and was so dry it bristled along his boney spine. His head looked too big for his skinny body and his eyes were vacant and expressionless. Only his cries for food were filled with desperation. I now realize that Atticus was the first cat I had ever seen so close to starvation. All of this, of course, pointed to the fact that Atticus was either lost or dumped; or, perhaps, a roaming stray that had once-upon-a-time known human companionship and love. What was immediately clear was that Atticus needed to be trapped, vaccinated, and neutered.

Over the next ten days Atticus’ visits were sporadic, and he only appeared every two to three days at feeding time. Although I felt certain that a strong breeze might whisk him away like dry leaves in the wind, his eyes began to lose their starving, vacant look and he appeared to be out of immediate danger. For this reason, Donna and I decided to refocus on trapping the elusive gray tortie called Maude. However, Maude was also unpredictable in her visits to the feeding station, and given the time of year—spring—probably had a litter in the oven, so to speak. Our plan was to trap Maude and let her give birth at Community Cats, a cat sancuary in Bedford, New York.

I was the first to attempt trapping Maude. I arrived at the feeding station early and fed Jem and Scout first. I then put a tablespoon of super fishy cat food on a quartered paper plate and placed it in the back of my True-catch trap. As I leaned over to set the trap’s mechanism I saw a flash of gray streak past my face and into the trap. I screamed and jumped back. Atticus never even looked up. He rapidly devoured the bait and then stared up at me from the confines of the wire mesh cage, crying for more. He seemed oblivious to the fact that he was now my prisoner. As long as prisoners got to eat, that was fine by him. That’s when I knew for certain: Atticus had been someone’s pet cat.

I immediately drove Atticus to my local no-kill shelter in Briarcliff, NY. Sadly, I was told there was no room for even a friendly cat, and that his best bet was to be vaccinated, neutered if necessary, and put back out. As one young tech put it, “If he’s friendly he can beg for food and maybe someone will take him in.” Once I recovered from the shock of what was, in my personal opinion, an insensitive and even irresponsible response to this sweet, starving boy, I called Community Cats in Bedford, NY. I knew that Director Penny Berk would never turn away a friendly stray that was down on his luck.

Today, five weeks after first seeing this half-starved little cat, I am able to say that Atticus is doing great! He’s put on weight; his coat is no longer dull and dry; and his eyes are a lovely, soft shade of green. What is even more amazing about Atticus is how happy and appreciative he seems. He loves pets and head rubs, and he can’t stop purring. For now, Atticus is content to be in his cage with his soft bed, full bowls of food, and catnip toys. Someday, we are all certain that Atticus will have a wonderful forever home.
Posted by Nancy at 11:35 PM