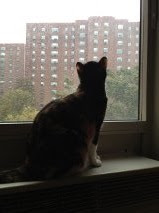 FOSTER CAT "RORY" WATCHES HURRICANE SANDY LASH INTO MANHATTAN'S EAST SIDE.  RORY (a.k.a. "ZILLY") IS ONE OF THE LUCKY ONE'S.  RORY WAS RESCUED BY NEW YORK'S ANJELLICLE CATS AND NOW HAS A WONDERFUL FOSTER HOME WHERE SHE IS A MUCH ADORED PET.


Although my current writing project, a YA Paranormal novel set in the Hudson River Valley, has been taking up my blogging time, I wanted to get the word out that ALL the cats at Stone Ledge are doing great! In fact, we have even added a new member. Twilight, a soft gray tortie, arrived last March. She was in the very early stages of pregnancy so we were able to successfully spay and vaccinate her. Twilight was joined by a beautiful gray kitten—presumably from her fall litter. Bella was at least five months old, but socialized quickly. She was adopted by a wonderful family and is now a much beloved indoor pet.

Twilight has moved into a feral house. She keeps her distance from the colony, but we have hopes she will eventually cavort and play with the rest of the gang.

In addition to Twilight and Bella, we were able to rescue a mama cat and her two tortie kittens (Butterscotch and Toffee) at a neighboring colony. Both kittens found loving homes, and mama has been successfully spayed and released in the colony.

Other big news at Stone Ledge is that we are re-vaccinating ALL of the cats! Yikes! In order to accomplish this we purchased a drop trap from Alley Cat Allies. It’s much easier to do than we anticipated. So far, we have re-trapped Max, Phantom, and Cry Baby. Our veterinarian does a full exam—including dental work if necessary. The cats also receive a dose of Revolution. Revolution is great for eliminating fleas, ticks, and ear mites. If a dental extraction is required then the vet administers a single dose of Convenia. (If only the cats could floss!) We feel Convenia is the best option with dental surgery for a cat that cannot be medicated any other way. We hope to trap and re-vaccinate the rest of the colony before the winter sets in.

We wish everyone a fabulous National Feral Cat Day! 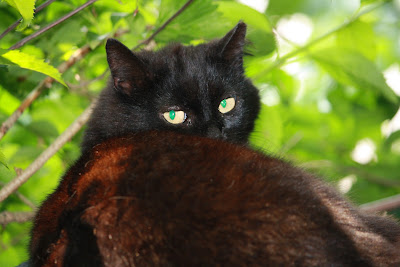